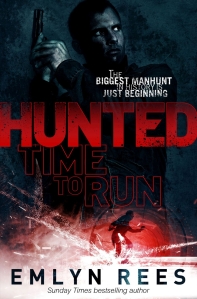 In Hunted, security expert Danny Shanklin  wakes up slumped across a table in a London hotel room he’s never seen before. He’s got a high-powered rifle strapped to his hands.

He hears sirens and stumbles to the window to see a burning limousine and bodies all over the street.

The police are closing in. He’s been set up. They’re coming for him…

With only his tech support friend, the Kid, for backup, Danny sets out on a nail-biting odyssey though the panicked city streets, in a desperate bid to escape, protect the people he loves, and track down the terrorists who set him up.

But with 500,000 CCTV cameras, 33,000 cops, 9 intelligence agencies, and dozens of TV news channels all hot on his tail, just how long will THIS one innocent man be able to survive?

‘Hunted gives new meaning to the phrase “fast-paced.” Filled with clever twists, stylishly written and populated with characters who are as real as our friends and family (and enemies!), this thriller moves at breakneck pace from first page to last. Bravo!’ — Jeffery Deaver

‘Fast and furious from the very start, Hunted is a shot of pure adrenalin.’ — Sam Bourne

Hunted and its sequel Wanted are published in the UK by Little, Brown and in the US by HarperCollins. 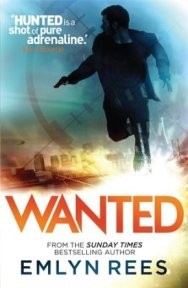 That Summer He Died 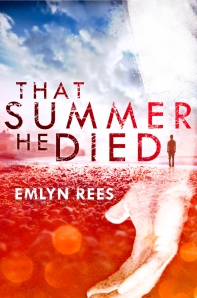 “A complex, well-thought-out plot…and a chilling twist in the end.” The Times

On the surface, James Sawday’s life couldn’t be any better. Writing investigative pieces for a glossy men’s magazine, he gets to travel the world. And when he gets home, there’s Lucy: smart, funny, seems to love him. She could even be the one.

But when James’s editor sends him to the seaside town of Grancombe, to cover a murder – the third attack by a serial killer who specialises in chopping off his victims’ hands – James finds himself sucked back down into a world he’s tried all his adult life to forget.

Ten years before, during a hazy, drug-fuelled summer, James was one of a group of teenagers who stumbled on the mutilated corpse of local artist Jack Dawes. And then the second killing happened – the one that still gives James nightmares.

Now James has got to dig up everything he’s worked so hard to bury. And what he’s going to find out could cost him his sanity. And even his life.

“Anyone who enjoyed Alex Garland’s The Beach should get a kick…an excellent modern thriller.” Daily Mirror